Just about a year ago, I released Messages from Shiva vol. 1, a book of channeled messages that I compiled from the daily messages I share on social media. Rather than presenting those messages in the same order as they had appeared online, I arranged them by concept, theme, and topic, and set up the book intentionally so that people could read it from cover to cover or could use it as a sort of oracle/divination tool by opening it at random to see what message showed up for them.

Messages from Shiva vol. 2 is the second compilation of messages I channeled from Shiva. Although it, too, is arranged by concept, theme, and topic, I’ve arranged it differently from the first book. It also can be read cover to cover or used as a tool. This will be the last compilation of messages from Shiva; in 2021, Shiva ceased being my primary guide and that role was taken over by another being called Pietkela. Shiva is still my guide, just not my primary one; and the daily messages, as of June 2021, are channeled from Pietkela rather than Shiva.

Messages from Shiva vol. 2 comprises the messages from January-May of 2021. The book officially releases Thursday and will be available in Kindle and paperback format; the Kindle edition is available for pre-order now from Amazon! 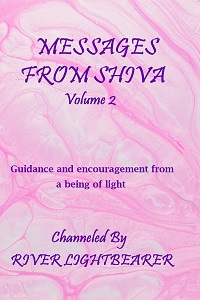